Apex Predator? I Am the Shark by Joan Holub 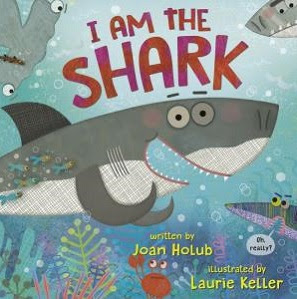 I'M THE BEST! NONE OF YOU DO IT BETTER!"

"I AM THE GREAT WHITE SHARK! I'M THE GREATEST SHARK IN THIS BOOK!"

Whale Shark cruises by, bragging that he's bigger than a bus, the largest and therefore greatest fish on the planet.

Dwarf Lantern Shark. who, as the smallest shark, dodges in and out, says he can hide anywhere and doesn't have eat much, saving time on hunting.

But Hammerhead Shark claims the biggest brain with all that space between his eyes. And his dark top side and white belly make him almost invisible to prey looking down on him and prey looking up at him.

"I'M THE SNEAKIEST SHARK IN THIS BOOK!!"

Angelfish Shark swims up from under the sand at the bottom of the sea. He brags that his camouflage makes him the most stealthy shark in the sea.

Great White Shark refuses to be put down, even when tattooed tough guy Tiger Shark claims he eats trash and metal car parts for breakfast, and Greenland Shark brags that he is 400 years old. Nobody can top that longevity, so Great White Shark sets off to prove he's the fastest swimmer among his finny kin, until...

Mako Shark, churning out 46 miles per hour, passes him like he's standing still!

Darn! It seems that the whole kit and kaboodle of the shark kingdom are pretty cool creatures, in Joan Holub's latest, I Am the Shark (Crown Books, 2021).

In this pescine power struggle amongst the sharks portrayed in the jolly cartoons of noted illustrator Laurie Keller, Holub's just published primary-grade book provides an introduction to shark lore that is both funny and informative for young readers. Author Holub imbeds considerable information in the text, including a diagram of a shark's shape and innards, and even appends her  "Fintastic Sharks Facts." Says Kirkus, "This book will be swimming off the shelves."