Sleepover Shuteye Song: Pete The Cat and the Bedtime Blues by Kimberly and James Dean 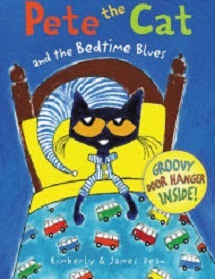 It's a cowabunga day on their surfboards for Pete the Cat and his buddies, but as the sun sinks over the breakers, they are having too much fun to call it a day. To keep their groove goin', they decide to have a far-out sleepover party at Pete's house.

But after scarfing up the pizza and partying hearty, Pete's eyelids are even more droopy than usual. He climbs into his stripey PJs and tells his friends it's time to catch some zzzzzs.

But it seems that Pete is the only one in a shuteye groove.

"IT WAS ME!" SAID GRUMPY TOAD.

I WANT TO CLAP INSTEAD."

The rest of his guests are also in the mood to pull an all-nighter. Gus the Platypus wants to drum and jam the night away, and Gator has the midnight munchies. But Pete is not in the mood for food!

What's a host to do? Pete has an idea. Perhaps an absorbing bedtime story will divert his guests. He pulls out a book, Pete the Cat and the Ten Little Monsters, and his pals pop into their sleeping bags to listen. Now, if only Pete can stay awake long enough to finish the book!

(Harper, 2015) has their popular cool cat dealing with a ticklish social problem, getting his rowdy buddies to cool it so he can get his beauty sleep. A particularly eye-pleasing palette of cool nighttime blues, right down to Pete's blue sleepytime wear, gives this story plenty of eye appeal, a new Pete tale that is indeed the cat's pajamas!

Pair this one with the irresistible MerryMakers Pete the Cat Bedtime Blues Plush Doll, 14.5",

dressed for snoozing in his blue-striped PJs and perfect for a role as a Christmas Eve dreamland lovey pal.
GTC at 12:30 AM
Share