The Bare Facts: Those Are Not My Underpants! by Melissa Martin 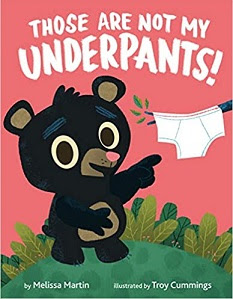 One morning when Bear Cub comes outside, he notices something unexpected hanging on a limb right out his door. Clearly someone had misplaced a pair of underwear. Bear Cub has simply got to get to the bottom of this!

"HI, SQUIRREL," HE SAYS. "ARE THESE YOUR UNDERPANTS?"

"NO. THERE'S NO HOLE FOR MY TAIL!" SQUEEKS SQUIRREL.

Turtle's no tattletale. He shows off the striped undershorts under his shell. Oh, well. Bear Cub moves on until he meets Owl, who says owls only wear sparkly briefs. Beside a rushing stream, he questions Salmon, who says he only wears sleek swim trunks.

In his cave, Bat, already hanging upside down from the ceiling, shows off his glow-in-the-dark bikini bottoms. Skunk sniffs the scanty panties and ventures that they don't stink enough to be his!

Then Bear Cub spots snake's head sticking out of his hole.

"HI, SNAKE! ARE THESE YOUR UNDERPANTS?

They are not Beaver's briefs either. He blushes and says that beavers are too shy to show off their underpants. And when questioned, Moose points out that he has to wear Extra Large underwear!

Bear Cub's case is about out of suspects. Back home, Mama Bear spots him with the mysterious tightie whities in hand.

"BEAR CUB! WHY ARE YOU CARRYING YOUR UNDERPANTS AROUND? I WASHED AND HUNG THEM OUT TO DRY LAST NIGHT!"

Looking down, now it's Bear Cub's turn to blush!

The case of the bare bear is solved, in Melissa Martin's newest, Those Are Not My Underpants! For the reading circle bunch, any mention of unmentionables, be they briefs or lingerie, is a sure-fire giggle getter, and with the award-winning artist Troy Cummings' lighthearted illustrations, this story promises a laugh a minute.