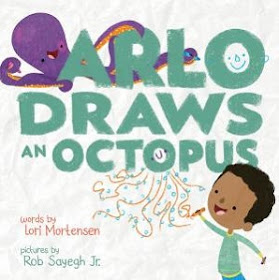 Arlo thinks octopuses are really cool. He decides to draw one! He's drawn houses and trucks and even his aunt's pet alligator! How hard can it be?

An octopus has a big round head and hardly any face. They have eight tentacles, all pretty much the same. Easy peasy! What could possibly go wrong?

ARLO PICKED UP A CRAYON. HE BEGAN TO DRAW. THE HEAD DID NOT LOOK LIKE A HEAD.

That should have been the easy part. The tentacles, eight of them, with all those suction cups, now that was the hard part. Arlo tries harder. but...

But Arlo refuses to be a quitter. Resolutely, he began to add the suction cups. Arghhh! Now they looked like stupid bubbles in the water!

He wadded up his drawing and threw it over his left shoulder. Rats! He can't even be a successful litterbug. He gets up dutifully to reclaim his trashed drawing, but when he opens it up, he finds an octopus artist has just tossed a pretty good likeness of him, right down to his favorite shirt. Meanwhile a purple octopus is perusing Arlo's sketch of him. He says it looks just like his favorite, Aunt Zillah!

It seems that good art lies in the eye of the beholder, in Lori Mortenson's just published Arlo Draws an Octopus (Abrams Books, 2021), and perhaps both young artists learn not to let the perfect be the enemy of the good. After all, we know that artist Roy Sayegh's illustrations made the cut for this book. Maybe it's a good idea to get a second opinion! Says Booklist, "A playful, reassuring picture book."