Cat and Mouse! Brave As A Mouse by Nicolo' Corozzo 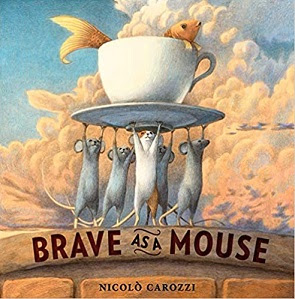 But all too soon three little cats appear and ask to join the game. (That doesn't seem like a good idea to Mouse!)

Mouse darts off, challenging the three cats to a game of chase.

Out of the parlor and into the bedroom she scampered, up the sheer curtains to the top of the window. Almost cornered, the little mouse leaps, dashes down the stairs and into the kitchen pantry!

BUT WAS IT A GOOD IDEA?

Yes! The cats are distracted by the bags of cat food there, And their tummies stuffed, they do what cats do best--catnap!

So Mouse has another idea. And with help from the others, they fill a teacup with water, goldfish jumps in, and all the mice help carry him out of the house, safe from the cats, and down to the pond in the park, where the goldfish finds a place safe from all cats!

IT WAS A WILD IDEA. IT WAS A GOOD IDEA!

And there's a happy ending for Goldfish, in Nicolo Corozzo's beautifully self-illustrated story of a lucky fish, who gets by with a little help from his friends, in Brave as a Mouse (Random House, 2020). Corozzo's noted artwork is both realistic and fanciful, done in muted colors and with delightful detail that fills the pages with lively action set before the charmingly homey interior backdrop of the old house. Says Horn Book, "“An entertaining game of cat and mouse. And one lucky fish.”