It's Here! What Is Climate Change? by Gail Herman 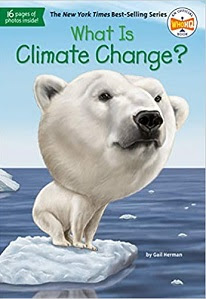 A skinny polar bear doesn't look much like a little yellow bird, but the huge white polar bear is the canary in the coal mine in the matter of climate change. Since 2016, the waters of Hudson's Bay have not frozen in November as they have always done. Starving polar bears who depend on sea ice to support their diet of seal have become common since then. There's no doubt that a warming planet has warmer oceans, lakes, and rivers, which threaten all living things on Earth in some way.

Gail Herman's slender non-fiction book, What Is Climate Change? (What Was?) (Penguin Workshop) tells it like it is for middle elementary and middle school readers. The author explains the difference between weather and climate, and describes how temperatures and rainfall have been collected by scientists over time, especially since 1880, when international temperature readings began to be collected all over the world, showing a rise in world temperatures of of three degrees Celsius or 5 degrees Fahrenheit over that time.

"Nearly all-97 percent--of climate scientist agree: Humans, and their impact on the Earth, are making a difference. We are just realizing the scale and permanence of the change."

"Recent human activity is he reason why Earth is warming and also wbhy it's happening at such a rapid rate. Some feel we should even mark this as a new era, much like the Age of the Diniosaurs: The Age of Humans."

In short, pithy chapters Herman covers how climate has varied wildly throughout earth's history, and how since the Industrial Revolution greenhouse gases from burning wood and fossil fuels like oil, coal, and natural gas have formed a layer in which such heat cannot escape the earth's atmosphere. She also points out how deforestration has led to loss of the natural cooling ability of vegetation from human activities, leading to a "vicious cycle" of more and more heating of soil, air, and water, causing ever more dangerous heat waves and extreme weather events, famines and fire events, and storms and ocean rise that threatens islands and coastal areas throughout the world.

Herman also recounts the names and work of scientists and world leaders who have worked rather heroically to bring an understanding of the seriousness of the global problem and to try to slow down the dire results of continued global warming. The skinny polar bear adrift on the melting ice floe is a poignant symbol of mankind in the face of the climate change we all are creating. With much information presented with clarity and detail and an appendix with a Timeline of Climate Change which begins in the U.S. with the first factory in Rhode Island in 1790 to Trump's withdrawal from the Paris Agreement in 2017, A World Event Timeline, and a Bibliography with books and websites, this succinct illustrated overview of climate change offers considerable information to students in Grades 3-8.