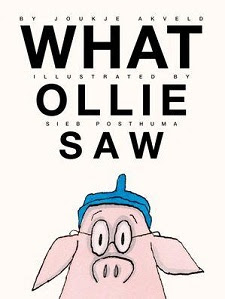 HE HAS A FATHER AND A MOTHER.

AND A SISTER HE SOMETIMES WISHES HE DIDN'T HAVE.

Ollie and his big sister don't see eye to eye

His mother loves going places on "excursions" that she calls "Happy Family Times!" Ollie often thinks their times would be happier without his wet-blanket of a sister!

When they take the train through the countryside, she thinks the grazing bovines are boring! Ollie prefers to see them as snorting water buffaloes with enormous horns capable of squashing a sister. When the family drives to see Granma, his sister grizzles rather grimly at the traffic jam. Ollie himself sees a circus parade with clowns and jugglers in the cars. And when Ollie's papa takes them out for a cruise in their sailboat, his sister sees a slow boat, but Ollie sees it as a pirate ship with his sister tied to the mainmast.

Ollie didn't see it that way, so when his teacher asked him to identify the letter A on the alphabet chart, he imagines the letter as a series of birds with long pointed beaks.

His teacher declares that he needs glasses!

I KNEW IT!" SAID HIS SISTER.

But Ollie is determined to make sure that he continues to see things the way he likes them, in Jouke Akveld's What Ollie Saw (IQ Levine Querido, 2021), who prefers to see his world his way. This is a whimsical porcine parable preferring imagination over grizzly grumbling that will appeal to younger brothers. Artist Sieb Posthuma's droll scratchy black line drawings, accented by strong reds and blues, extend the comic story of sibling rivalries.