Song of the The Sleepy Sea: Ocean Lullaby by Laura McGee Kvasnosky 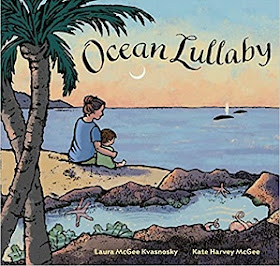 SONGS FLOAT UP, MOON SMILES DOWN

WHILE WE ROCK TO OCEAN SOUND.

A family sits, circled around by the sea, the littlest cuddled in Mom's arms, soothed by the soft sound of the waves. The seaside scene grows more still as night comes on. In the tide...

SEALS SNORE ON THE SHORE.

The sea sings its steady sonorous song, a seaside lullaby's steady rhythm to the breaths of the now sleeping child.

The sybillant sea works its magic on everyone, child and adult, as everyone gives over the the ocean's song, in Laura McGee Kvasnosky's lovely lullaby of ocean sounds, in Laura McGee Kvasnosky's Ocean Lullaby. Framed by artist Kate Harvey McGee's charming black line and muted color illustrations, this striking picture book captures the mystery of the seas rhythmic ebb and flow in a gentle restful song of rest, just right for bedtime. Says Booklist, "This dreamy paean to the ocean’s mesmerizing influence [is] guaranteed to soothe little ones at bedtime."