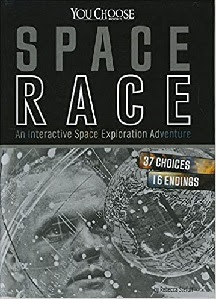 YOU are living in the mid-1900s. The world's two rival superpowers each want to be first into a new frontier: space. But space is full of hazards. Sending a machine, an animal, or person into it will take skill, hard work, and daring

"WE WILL BURY YOU." Nikita Krushchev, the premier of the Soviet Union, had thrown down the gauntlet. Allies of the United States in World War II, the Communist Soviet Union had almost immediately taken over much of war-torn eastern Europe. In a sort of quasi-war, they had exploded their first atomic bomb and launched the first earth satellite, and now the race to space was on. So far the U.S. was losing. The Soviets had already sent a monkey, a dog (the famous Latka) and a man into space, orbiting the earth in a space craft and returning to earth safely.

But the United States accepted the challenges of manned flight into space. A cadre of super-skilled jet pilots who had flown to the edge of space were chosen to be America's "astronauts" whose mission it was to outdo the Soviet "cosmonauts" and eventually place the first man on the moon, as President John F. Kennedy said, "in this decade."

What was it like to design and fly those first spacecraft, "to bravely go where no man has gone before?" Many choices had to be made in the building and flying of those first few fragile spaceships. Thousands answered the call to do the work and many decisions--the right choices--had to be made, some ending in failure and loss of life. Would you have had "the right stuff" in the space race?

You are a crack electrical engineer who wangles a secret role in testing atomic weapons by designing electronics to detonate them at long distances. From the supposedly safe distance in a Navy ship, you watch your efforts succeed with more than the expected success. Many on the ship receive a high dose of radiation from the fallout. You are horrified. You didn't really wanted to help create weapons that can cause mass death. You fear your choice may cause your own death from the long-term effects of that overdose of radiation. Should you continue with your work, or perhaps find different work with less dire consequences. You choose.

Your engineering qualifications earn you a job at Redstone Arsenal in Alabama, working under the former Nazi rocket designer Werner von Braun to design the electronic communications that will enable a spacecraft that can separate from the Redstone rocket to orbit earth and return safely to earth. But the first design fails a previous lab test because of the length of one connective prong. You worry about that design. Should you speak up about your concerns, or say nothing and let the final trial go off on schedule. You choose.

There is a failure, and the prong is the cause. Should you leave electrical engineering for a job without the high stakes of rocketry--like becoming a science teacher who trains scientists for the future? Or should you continue perfecting the project of designing the separation process that allows a space capsule to separate from its rocket in space and orbit earth. You choose.

Should you, a woman pilot, try out for the job of astronaut? After all, some scientists aver that women have more of "the right stuff" than do the hot-shot pilots in their first trials. What could happen if you try to qualify? Will prejudice against women rule out female astronauts forever? Could you be the first female astronaut, or will that role wait for another to sally into space for that thrilling ride? You choose.

As Dumbledore famously said to his aspiring young sorcerer, "it is in your choices, Harry Potter..." and there are 37 choices and 16 potential endings that result in Rebecca Stefoff's Space Race: An Interactive Space Exploration Adventure (You Choose: Space) (Capstone Books), a book that offers middle elementary and middle school readers actual personal choices faced by real persons in the era of the race to space. Like its predecessors in The Oregon Trail and Choose Your Own Adventure series, this series offers the sort of adult decisions to be made in this challenging historic period in which real-world, life-and-death choices created the world we now live in. This book inspires kids to keep turning pages and considering their decisions to their conclusions, and it is well-suited for young readers in the years in which they begin to learn to consider the possibilities as they choose their own paths in life.