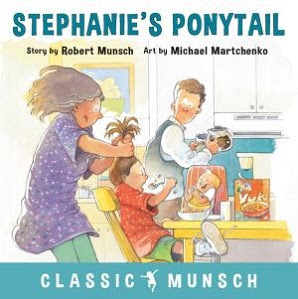 ONE DAY STEPHANIE SAID, "MOM, NONE OF THE KIDS IN MY CLASS HAVE A PONYTAIL. I WANT A NICE PONYTAIL COMING RIGHT OUT THE BACK.

A little dubious, Mom complies, and as predicted, the kids at school pronounce her ponytail not just ugly, but...

But, to Stephanie's surprise, the next day all the girls have copy-cat straight-out-the back ponytails!

"YOU ARE ALL A BUNCH OF COPYCATS!" STEPHANIE SAYS.

So the next day, Stephanie switches her ponytail from the back of her head to the side, right over her right ear.

And the other kids declare her new style UGLY.

But the next day, all the nay-saying girls and a few of the boys are sporting over-the-ear ponytails. So Stephanie, over her mom's objections, asked for a ponytail coming out of the top of her head. Her schoolmates pronounce it almost too ugly for words, but... the next day....

IT LOOKED LIKE BROCCOLI WAS GROWING OUT OF THE TOP OF THEIR HEADS.

So Stephanie tried wearing a ponytail hanging down over her face, and the next day--everyone else did, too. bumping into everything.

... AND THREE GIRLS WENT INTO THE BOYS' BATHROOM.

What's left to do with a ponytail? Nothing!

Stephanie tells her classmates that they haven't a brain in their heads!

Imitation may be the sincerest form of flattery, but in this spoof of human frailty, Robert Munsch's Stephanie's Ponytail (Classic Munsch) (Annick Press), Stephanie tosses her ponytail and has the last laugh at her gullible and hairless followers. Author Munsch's nutty noodlehead tale and comic artist Michael Martchenko's jolly illustrations offer plenty of giggles to youngsters fond of the sort of absurbities that Munsch's stories are guaranteed to provide. "Predictable, irreverent Munsch,” says School Library Journal.