Who's That Brave Girl? Out Into The Big Wide Lake by by Paul Harbridge 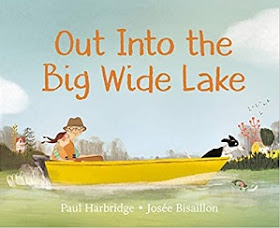 THERE WAS A KNOCK AT A DOOR. KATE WASN'T SUPPOSED TO OPEN IT--EVEN THOUGH SHE WAS BIG NOW.

THE DOOR OPENED. A BIG WOMAN STOOD THERE! "GRANDMA!" CRIED KATE AND RAN TO THE DOOR.

Kate's dad says that Grandma wants her to come and stay with her for the summer, like her big sister has done already.

"WHY NOT? GIVE HER A CHANCE." SAID GRANDMA.

So Kate finds herself on the train on the the way to Grandpa's and Grandma's store by the lake. It seems like a long way, and it feels strange without her mom and sister with her. But grandpa and his little dog Parbuckle meet them with his boat, and Grandma starts the motor on the boat and soon they arrive at their little store across the lake.

And the next morning, Grandpa invites Kate to help him deliver groceries to the people around the lake. He shows her how to start the motor and how to steer it left and right and in circles.

Grandpa and Kate deliver groceries to happy people around the lake until they come to one place with big rocks around the landing. A grim-faced man is sitting there on a rickety old dock.

With a frown Walter took the box of groceries.

"BRUISE ON THIS APPLE," SAID WALTER. "THAT GIRL MUST HAVE DROPPED IT."

"SHE DID NOT." SAID GRANDPA.

All summer Kate helped Grandpa deliver the groceries. She liked all the people on the lake--except Walter--and practiced steering the boat through the waves. But one morning as they are about to leave for their delivery route, Grandpa had a sudden bad pain in his chest and sat down fast. Grandma had to drive him to the doctor's office, leaving Kate alone. Kate waited for a long time, and then decided to deliver the groceries all by herself. Why not? She knew how by now. She set off and delivered the groceries without a problem. Finally, only Walter's box was left. Kate steered the boat carefully through the big rocks. Walter was waiting for her. He looked unhappy to see her.

WHERE IS YOUR GRANDFATHER?" HE ASKED GRUFFLY.

Suddenly Walter stepped into the boat and ordered her to take him back to her grandparents' store.

Kate steered the boat carefully against the wind and waves, and when they arrived at their dock, the doctor was just telling Grandma that Grandpa would be all right after a few days of bed rest. And in Paul Harbridge's just published Out into the Big Wide Lake, Kate learned that cranky old Walter is Grandpa's brother and her own great-uncle. And Grandma was very proud of how well she had delivered the groceries and piloted the boat safely home. And why not?

Artist Josee' Bosaillon's illustrations extend the narrative and help older readers to discern than Kate is a Down's syndrome child, one who is lucky to have a family who gives her support in becoming self sufficient, capable of doing tasks on her own. Younger readers will just be glad that she got to steer and run the boat all by herself.