A Walk On The Wild Side: The Nonsense Book by Eric Carle 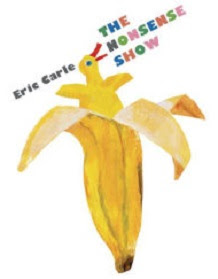 In the latest work of that dean of picture book art, Eric Carle, readers are given license to park their rational brain outside and enter an especially colorful world of the absurd. Within the slim conceit of a cockamamie circus midway, nothing is what is to be expected.

BUT "NEIGH NEIGH!" SAID THE HORSE.

And so they do, laughing at the inane sight of themselves as a horse-headed man and a human-headed horse. A mama Kanga sports a human Roo in her pouch, a train's smokestack puffs out fluffy white sheep instead of smoke, and a man sees a surprised ape staring back at him from the trick mirror.

In his latest, The Nonsense Show

(Philomel Books, 2015), Eric Carle dishes out a preposterous plenty of balderdash in a bit of a delightfully bizarre departure from his usual story books, letting his silly side go for the surreal, a setting in which it is perfectly reasonable when a magician pulls a boy out of his hat

But not to worry: Eric Carle's signature tissue-paper collage technique is in full display here, in a peerless illustrative style that is a fantasy feast for the eye. "Carle hits it out of the nonsense park," says Booklist.