Lift Off: The Plan by Alison Paul 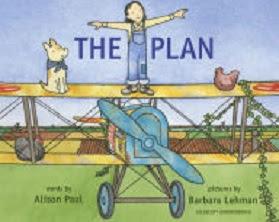 Everything begins with a plan... and inside a prairie farm girl's notebook are pasted objects--a blueprint for a Curtiss Jenny bi-wing, a postage stamp with the plane's image, a colored-pencil sketch of the girl at the controls and her dog behind her, a torn-out picture of Saturn and a map of the solar system with a red arrow from Earth to Saturn drawn in... A dream, or a plan?

(Houghton Mifflin Harcourt, 2015) is a bit of a tour de force, a story in which little is said, but much is told.

With a text made up of only twenty words, beginning with plan, and progressing by the change of one letter per page to move the girl's plan from dream to completion--planet, plant, pants, through past, paint, and plain, and back to plan again, the plot moves with the help of Caldecott-winning artist Barbara Lehman's stylized but evocative line drawings.  The reader follows the girl doing her chores with her dog, digging potatoes, and hanging wet wash on the clothesline, until a key falls from her Pa's pants' pocket. Sneaking behind Pa, busy washing dishes at the sink, the two pals slip into a room where the girl uses the key to open a locked drawer and the dog pulls a photo album from the shelf.

It opens to snapshots of her mother and father, intrepid pilots in the past, (which explains the biplane by the chicken coop, tethered now by vines), barnstorming the plains in their Jenny, The Mighty Comet, her mother's wings, license, and photos of her parents in their helmets, goggles, and boots, holding her as a baby. Her dad follows her upstairs, finds his daughter wearing her mother's goggles and helmet, and.... now her plan becomes his.

He pulls out the old sign, See The Mighty Comet, adds a few words including a invitation to see the flight on Tuesday at the field, paints and repairs the plane, presents the wings pin to his daughter, and not without some pain the three pick flowers and place them on the her mother's grave. Then they prepare a picnic, pack their bags for a trip, put on their pilots' gear, and are soon soaring over the plains to the waves and cheers of the people below.

Barbara Lehman's artwork is both cozy, with  the farmhouse kitchen sink and its little pump, the pots and pans hanging in a row, and masterful, in its iconic flat, geometric landscape, with its squared-off plots laid out across the prairie plains, the rectangles and triangles of the farm building, "all neat and square."  Lehman's interiors are likewise divided into geometric shapes, the parallel floor boards and wainscoting, the human figures, shown full frontal or profile, done in flat coloring book-style illustrations, balanced on the page. But juxtaposed behind them all is that open sky, blue and inviting, that seamlessly goes on and on, and the little plane that promises to lift them up and away to the final page as the plane flies through the starlit night. Where? Among the stars, to Saturn, someday? A place where the geometry is anything but square? Perhaps.

A completely satisfying picture book in which text and illustrations combine to become more than they seem, a story of life and death and dreams and flying machines repurposed.
GTC at 12:30 AM
Share